In an industry built on name recognition and reputation, Rocky Patel’s passion has brought his luxury brand to heights unseen by most boutique cigar manufacturers. His hard work and long hours have been paying off in big ways. 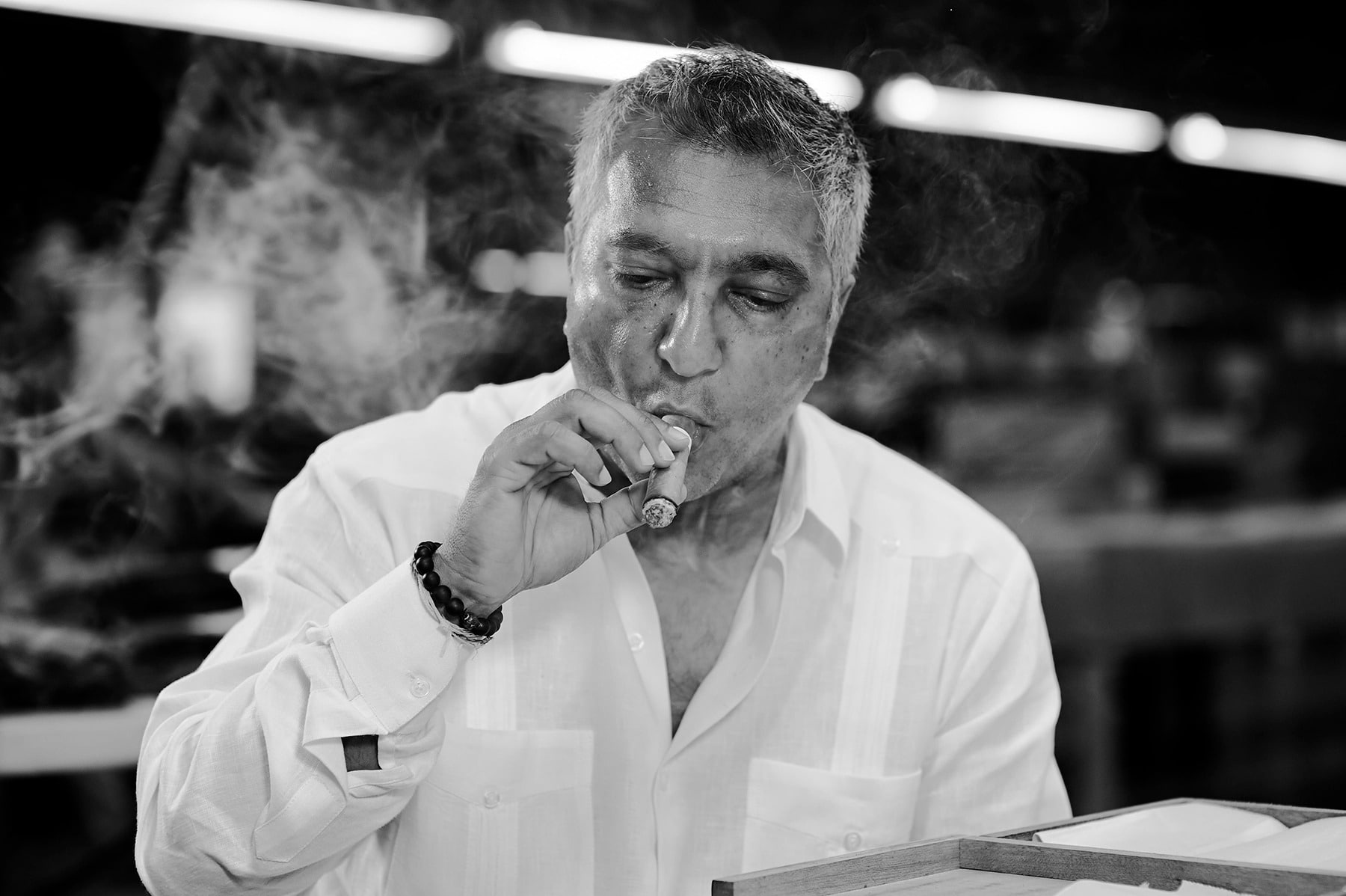 A survivor of the cigar boom, Patel has outlasted his competition with unrivaled persistence on his quest for perfection. With a grueling travel schedule, office responsibilities and production, Rocky still maintains the enthusiasm that he has had since day one. As he travels the world, putting his cigars in the mouths of his consumers, his passion extends beyond the retailer, allowing his customers the experience of meeting the man behind their favorite smokes. Rocky Patel has created a company that outshines even those created by multimillion dollar corporations, and he’s doing it one customer at a time.

In the early 1990s, the premium cigar market began to drastically change. Rocky Patel lived and worked in Los Angeles as an entertainment and product liability lawyer. Through a friend, Rocky was introduced to cigars and became instantly fascinated by them. He joined the Grand Havana Club in Los Angeles as one of its founding members. While dabbling in various investment ventures, Rocky was approached with a business plan to manufacture cigars. It was still the early days of the cigar boom, and Rocky was still apprehensive. However, the investment was made, and the inaugural Indian Tabac cigars rolled in Honduras began to flourish on the American market.

While his friends and colleagues had said, “Don’t be foolish, you’ll never make it in the cigar industry,” Rocky had already completed the first step of his journey. In 1996 at the RTDA trade show in Cincinnati, Ohio, Indian Tabac Cigar Co. had arrived. People flocked to the booth to purchase hundreds of these new, brightly packaged sticks. Rocky felt that it was up to the young companies to come into the marketplace with fresh ideas, bold packaging and fuller cigars. With his eye-popping packaging, Patel has gone against the grain and the strategy certainly paid off.

In constant search for perfection, not a single moment goes by that Rocky is not thinking about cigars. From packaging, marketing, improving blends and every other facet of creating the finished product, Rocky is always formulating fresh ideas and new techniques. It is important for Patel to have a product that can sell itself. Yet partnerships are at the forefront of Rocky’s business, which is why Rocky takes to the road as often as he does. Traveling also gives him the time to contemplate new marketing ideas and production concepts before implementing them.

Often heralded as the hardest working man in the business, Rocky Patel is married to his arduous schedule. He rarely sees his home and headquarters in Naples, Florida. Yearly, he logs more than 300 days on the road and over 150,000 miles. He has once been in 600 cities within 750 days! However, the time on the road is worth it, considering that in every town, Rocky strives to win over new customers to his lifestyle brand. This practice is an extension of Patel’s plan to get his cigars in the hands of as many people possible. In the ‘mom and pop’ world of tobacconists, it is important for Rocky to share his enthusiasm for his stellar product. That enthusiasm is often times contagious, and it shows in the faces and attitudes of consumers worldwide.

"ONE OF A KIND EXPERIENCE"

While meeting new people everywhere he goes, Rocky also hosts Factory Tour trips to his facilities in Honduras and Nicaragua for cigar aficionados worldwide. He wants to give his consumers a ‘one of a kind experience’ by witnessing first hand the passion behind his cigar manufacturing operations. The meticulous labor and quality control witnessed by his guests is translated into a real understanding of the dedication and time it takes to make his cigars. Rocky also makes sure that each and every guest gets to smoke the finished product. This is just one of the myriad ways in which he gains devoted consumers for life.

Apart from maintaining a consistent presence in the public eye and inviting his customers on the trip of a lifetime, Rocky Patel spends much of his time focusing on production and blending. He aspires to create more complex cigars while avoiding linear such as puros, which comprises binder, filler and wrapper tobaccos from the same country. Rocky believes that blending tobaccos from various regions takes greater skill and deft knowledge. The end product may develop into his next amazing cigar. Developing complex blends, however, is a painstaking feat, yet Rocky also strives for 100 percent consistency, placing heavy emphasis on quality control. Every cigar is thoroughly inspected through various quality control departments before being packaged for export.

In 2003, Rocky changed the company’s marketing direction by emphasizing on branding himself. The first step was changing the company name from Indian Tabac Cigar Co. to Rocky Patel Premium Cigars. Rocky’s first brand featuring his name, the Rocky Patel Vintage cigars, has become his flagship brand comprising five Vintage Series: 1990, 1992, 1999, 2003 and 2006. Since the company’s new direction began, Rocky has launched numerous top-selling brands, including The Edge, Decade, Fifteenth Anniversary, Royale, Java, Twentieth Anniversary, and Sun Grown Maduro – his highest rated cigar from Cigar Aficionado magazine that earned 95 points and the #2 Cigar of 2016. While honored and humbled by such as accolade, Rocky Patel is far from satisfied. He’ll never rest on his laurels, for there’s more perfection to achieve.